The following information does not replace a physician’s diagnosis and advice under any circumstances whatsoever.

The Spiraldynamik® principle reflects a unique natural blueprint. Helical dynamic processes and structures can, for example, be observed in vortexes, mussels and snail shells. But we also encounter this concept within the human organism. Thus, the principle of Spiraldynamik® is in our DNA because the DNA is structured as a double helix and our genetic information is arranged there helically. Also, the arrangement and function of the muscles used as a basis for walking straight represent this principle.

So, Spiraldynamik® is a therapeutic concept which follows the laws of nature. 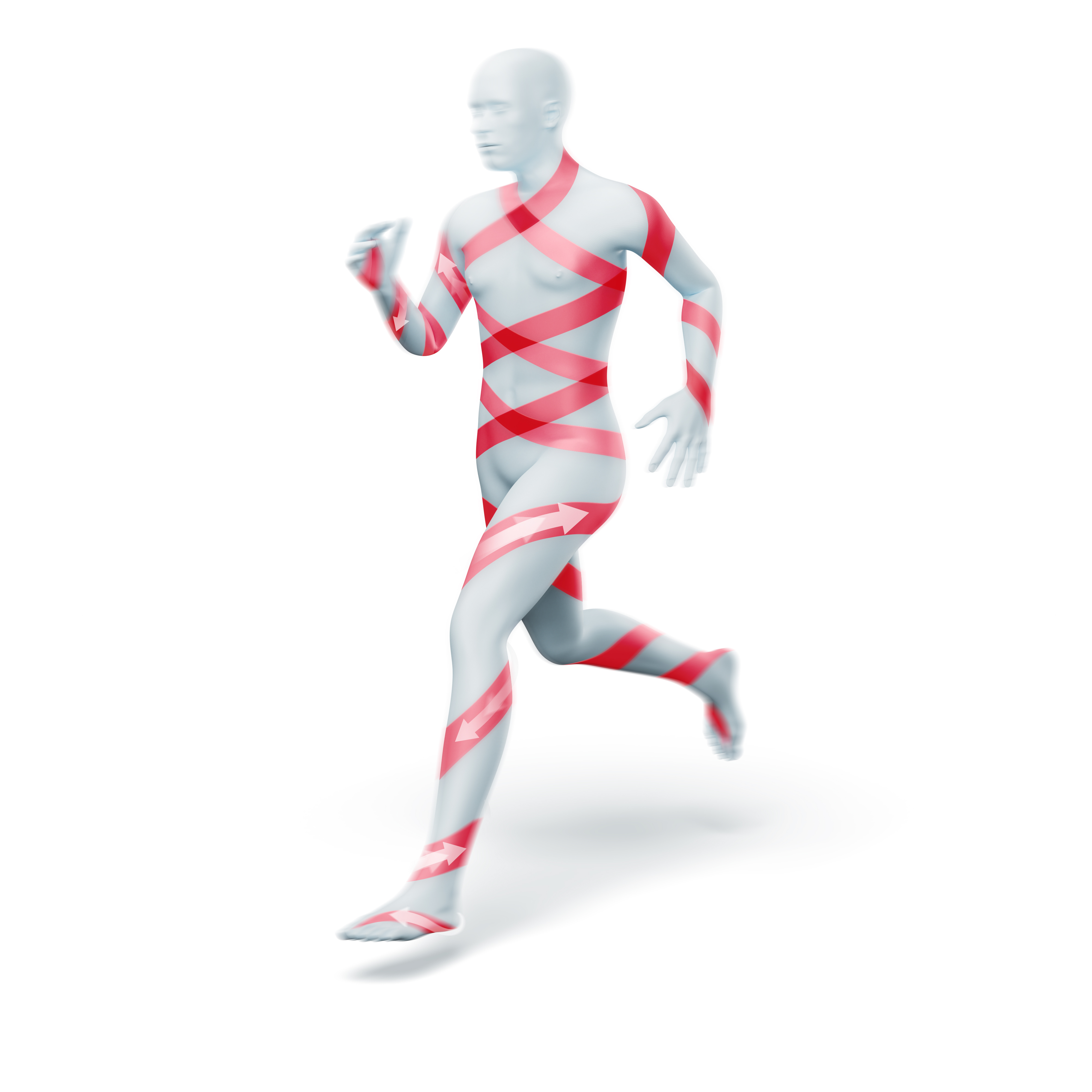 The French physiotherapists S. Piret and M. M. Beziers developed the principles for the concept. The physician Dr. Christian Larsen and the physiotherapist Yolande Deswarte developed it further under the name of Spiraldynamik®. For more than two decades, the exercise and therapy concept of Spiraldynamik® offer a basis to identify and treat functional discrepancies of the body.

The basis of the three-dimensional, helical screw-type connection is caused by the mutual rotation of two poles. This self-explanatory principle at a first glance proves to be a complex, three-dimensional structural and functional principle for the human body when observed more closely.

The principle of helical screw-type connection is shown, if you observe the movement structures more closely: By connecting the body’s coordination units (e.g. the hand or foot) using screw-type connection under stress, the bone and connective tissue shares are moved towards each other or positioned so that stability arises. Here, the muscles determine the direction of movement.

Thus, walking functions as a principle of counter-rotation of the pelvis and upper body, i.e. the pelvis successively combines against each vertebra in the chest area. Here, the chest is screw-connected in an opposing direction and pendular movement of the arm results. Also, swimming movement for crawl follows this principle and equally all throwing and impact movements. Moreover, the three-dimensional screw-type connection can also be observed in further areas of human beings’ functional anatomy such as the arrangement of the functionally jointly acting muscles, the inward and outward rotation of the arm or foot, the function of the cruciate ligaments in the knee joint and the rotational joint mechanism of the elbow.

Spiraldynamik® in case of foot complaints

The helical screw-type connection of the human foot probably arose during the course of the development from primates to human beings, i.e. as a consequence of walking on two legs. To this end, the arch of the foot was formed. Thanks to the helical structure, it is elastic and at the same time stable when stressed and adapts to unevenness of the ground and various pressure situations to which the foot is subjected when walking. So, whilst the back of the foot is stable, the metatarsal and the arch of the foot are mobile, enabling them to ensure the necessary balance (inward and outward rotation). The elastic forefoot cushions the weight when walking. These properties form the principle of Spiraldynamik® in the region of the foot. 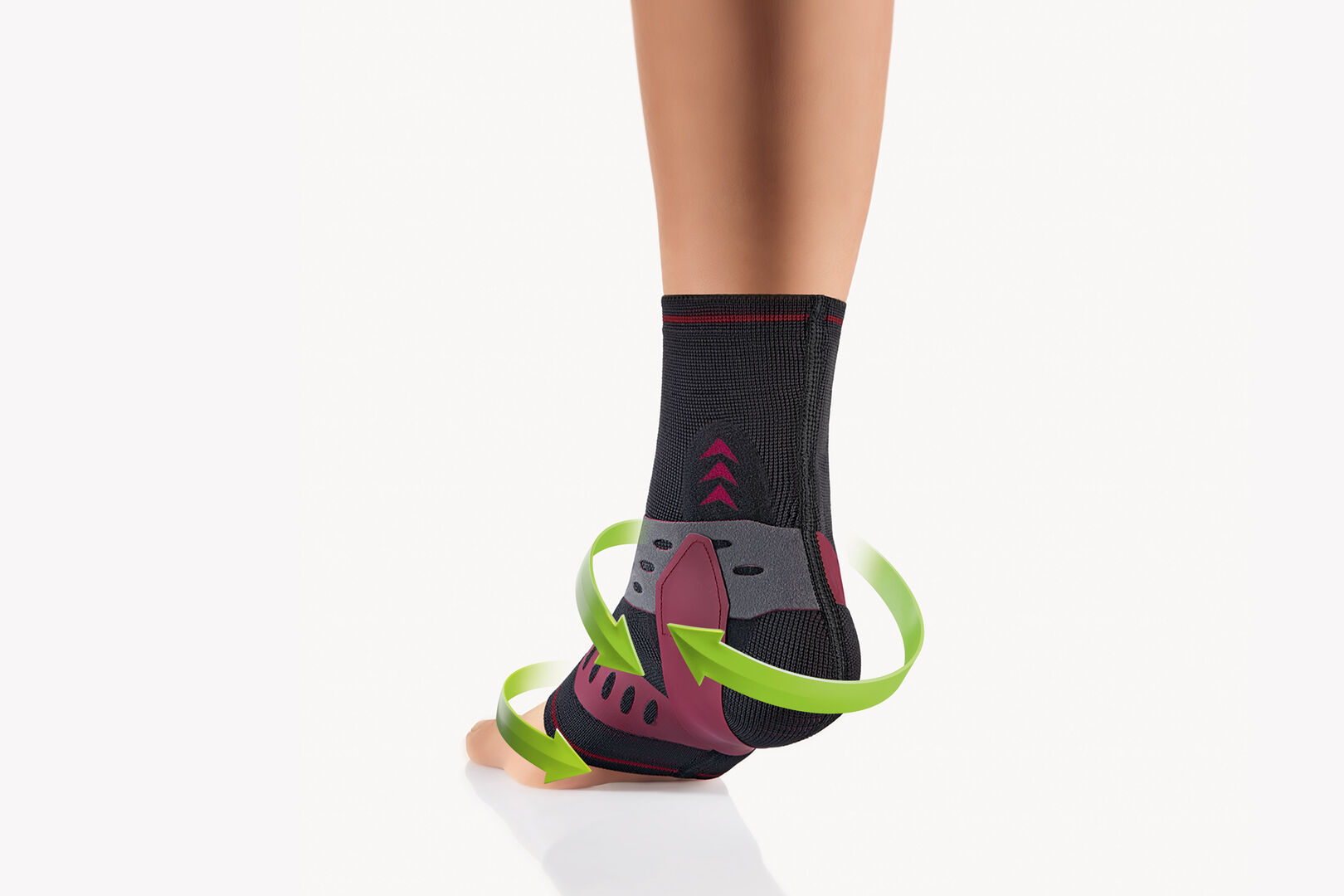 If foot complaints can be attributed to functionally caused reasons, therapy according to the Spiraldynamik® concept can be applied. Functional influences include, for example, the hallux valgus, skew and splayfoot (also with fallen arches), inflammation of the plantar fascia (tendon layers of the sole of the foot) and heel spur, but also hammer and claw toes and pressure sores on the feet resulting from their deformation.1

Exercises according to the Spiraldynamik® principle can ensure in several cases that analgesia, resilient elasticity and powerful dynamism are regained when walking and during all other movements. Here, the joints, muscles and fascia are treated. The learning target is to move anatomically correctly in everyday life, during leisure time and when working.2

- Ankle bandage to support torsion of the back of the foot and to raise the instep
- Thin, elastic straps
- 3-D contoured knit
- Two silicone pads
- Extra soft, snag proof material edge at the calf

- Ankle bandage to support torsion of the back of the foot and to raise the instep
- Ligament separation thanks to longitudinal cuts for an anatomical fit and optimal function
- Thin, elastic straps
- 3-D contoured knit
- Two silicone pads
- Extra soft, snag proof material edge at the calf
- Also for children

THE MED-BENEFIT
- Stabilisation of the ankle joint and activation of foot muscles through compression
- Functional supportive restraint in the case of classical foot deformities (i.e. skew and splayfoot)
- Optimal comfort even during intense activity
- Intermittent massage
- Separate slip-on aid included